Will we lose some of Croydon's parks? | Croydon Conservatives Skip to main content

Will we lose some of Croydon's parks? 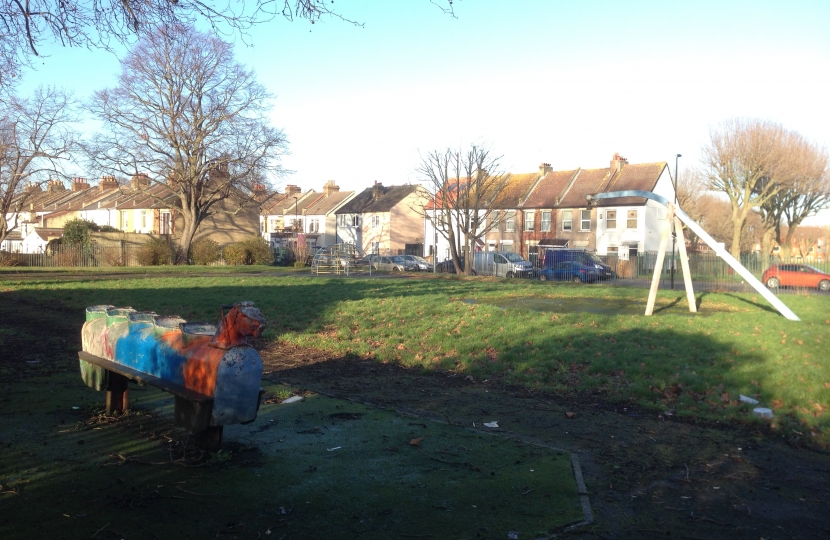 The Council’s decision to close Boulogne Road Playground in Selhurst is a worrying sign.  I think it is appropriate to revisit an article I wrote in April 2018 following the Labour Council’s lack of protection for 31 parks in the Local Plan.  At the time, my questions to Labour Cabinet Members about this lack of protection were dismissed as scaremongering.  The Council’s recent actions, and its dire financial situation, once again raise the possibility that some of Croydon’s parks could be lost forever.

There has been a great deal of controversy surrounding the Local Plan that was recently signed off by Croydon's Labour Council.  One of the most controversial elements was the lack of protection for some of the town's parks and green spaces.

There are 31 parks that have no special status in the Local Plan which leaves them vulnerable to development.

So how did this come about?

The simple fact is that the Council, under the direction of Labour councillors, failed to make a strong enough case to justify the protection of these parks.  They didn't realise their mistake until the process was nearly over and their last-minute attempts to get them designated as 'Local Green Space' were unsuccessful.

Labour's lack of interest in the Local Plan has been evident throughout the process and it was in stark contrast to the attention it was given by local residents and other local councillors.  Thousands of residents responded to the consultations, but their views were largely ignored.

So, just what has happened to Croydon's parks as a result of the Local Plan?  And are the 31 unprotected parks worth saving?

I decided to find out more about the parks that have no special designation, and see for myself what might be lost if they are built on.

I have visited twenty of the parks.  The first thing that struck me was that the majority of them have children's play grounds.  I had imagined that they would be little-used spaces with few facilities but that simply isn't the case.

During my tour of the unprotected parks I came across some hidden gems.  There was Pollards Hill Triangle, tucked away behind the houses off London Road in Thornton Heath, which had a wonderful display of daffodils.  Then there was Normanton Meadow in South Croydon which is a delightful small green space used primarily by dog walkers.  Temple Avenue Copse was another surprise.  A small woodland area that is beautifully cared for by Spring Park Residents Association and comes complete with nest boxes.

There are also smaller parks and these are likely to be the most vulnerable to development.  The ones in the north of the borough such as Dartnell Road Recreation Ground, Canterbury Road Recreation Ground and Boulogne Road Playground, have an air of neglect about them.  They are the ones I am most worried about.  The Boulogne Road Playground appears to have been left to decay.  The play equipment that is there is minimal and not fit for purpose.  Some of the park is already behind hoardings and has been handed over to a neighbouring development.  Most of the Canterbury Road Recreation Ground is also behind hoardings.  This leaves very little recreation space and a very small playground.  It is hardly surprising that people feel these parks could redeveloped for housing.

The neglect is not confined to the north of the borough.  Parks in the south are also in a sorry state.  Bourne Park and Roke playspace are in great need of attention. And the green space that used to be the allotments near Godstone Road in Kenley has been left to become overgrown and inaccessible.

As the number of residents in our town increases, the demand for green space can only increase.  With more and more people living in flats without a garden, they will need access to parks for themselves and their children.  So we will need more parks, not fewer.

The parks in our borough that are the best maintained are those with Friends Groups.  It was clear that many of 'The 31' do not have the support of Friends Groups and they receive very little attention from the Council either.  It demonstrates that we cannot rely on Friends Groups to manage our parks - the Council needs to take more ownership and actively manage them.

The recent Council consultation about parks only included six parks.  In theory the six masterplans will be adapted for use by other parks.  But will they?  The Council is expecting Friends Groups to bid for grants and secure funding for the implementation of the masterplans.  This is a big ask, even when many of the six parks have Friends Groups.  So what chance is there that the smaller parks will benefit from future investment?  They will have to rely on a Council that is already failing to maintain these important assets.

It is clear that we need a new strategy for parks.  The Council needs to stop consulting and put some serious effort into securing the funds to ensure the future of our parks.   Already we are seeing some under threat and this trend will only continue if we don't manage our park effectively.  The current state of some parks, and the lack of protection under the Local Plan, means that there is a very real possibility that we could lose some of these precious green spaces.

Cllr Helen Pollard is a Councillor for Selsdon and Addington Village and was Shadow Cabinet Member for Culture, Leisure and Sport from 2016 to September 2020.

Ian and Shakera are your local Selhurst team, working all-year round to challenge the Labour Council and incumbents and represent the good people of Selhurst. Contact us at Selhurst@CroydonConservatives.com