Over the last few months many may have noticed that there's been an increase in graffiti in Park Hill.

I've been contacted by local residents, and Park Hill Residents Association to ask what can be done.

Some of the graffiti is particularly offensive and on a route used regularly by children heading to Park Hill schools - Junior and Infants.

I've taken this up with officers at Croydon Council who have after pressing repeatedly, promised today that they will prioritize dealing with as soon as possible.

Its disappointing its taking so long to sort something so simple, and clear the impact of the council failing finances is now having on residents.

I'll keep standing up for Park Hill and pressing until the offending words are gone. 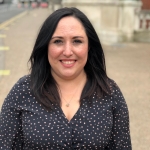 I love walking around the Park Hill and Whitfgift area. It’s a place that’s truly unique in Croydon, and it’s that special quality that I want to protect as your local councillor.

Cllr. Jade Appleton and the Park Hill and Whitgift Conservatives are hard at work for you. We are determined to protect Park Hill and the Whitgift Estate's special character.